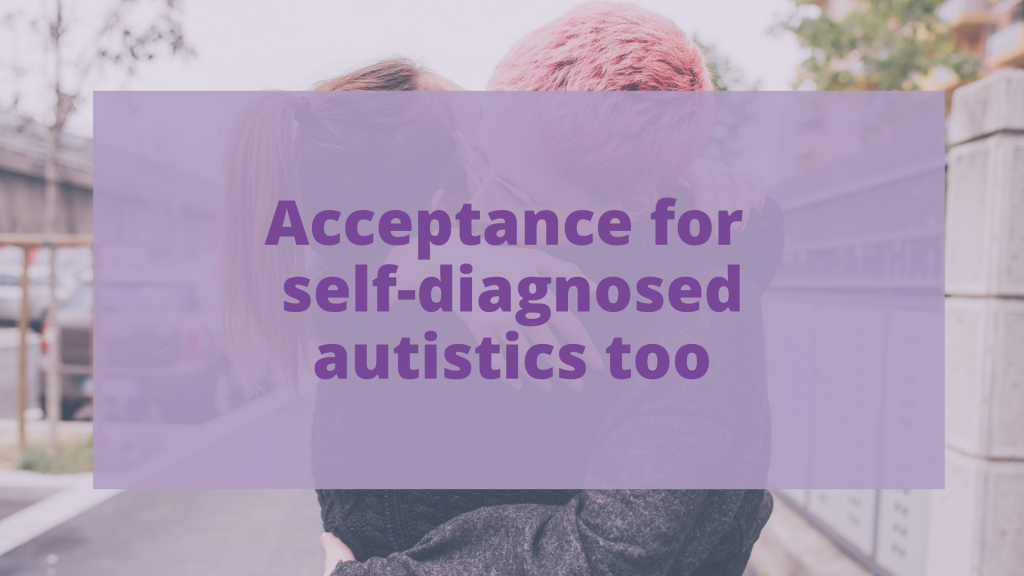 This month, as you might know, is Autism Acceptance Month and for many, it can be a difficult time. There’s so much talk about how autistic people should be embraced and accepted for who they are but what about those self-diagnosed autistics who can’t access a formal diagnosis? Although loads of amazing autistic content creators stipulate that self-diagnosis is valid, there are the small minority who seem to viciously disagree. As is their right.

This is why I started making videos and blogging about the subject because as soon as I did, I realised how many self-diagnosed autistics are out there and need reassurance and support.

I say this now and I’ll repeat throughout this blog:

I do truly believe this. I’ve heard from so many people who are SD and have had so much hate directed at them. It’s not fair and it really makes me angry.

I do have to say that 99% of autistic people are bloody fabulous and make me proud to be autistic. They’re so kind and bubbly and proud of who they are and I love that!

To be honest with you, I am one of those people who had hate directed at me and it still makes my blood boil to think of it. It’s totally fine to have a differing opinion, because what would the world be if we didn’t? It’s not fine to send a tirade of sexist and demeaning abuse into DMs or on comments, throwing your weight around because you have a formal diagnosis. Not cool.

Everyone struggles in life to varying degrees which is really sad but it happens. It’s about how you deal with it that matters. I could’ve stopped sharing my truth because a small minded minority didn’t like it but it’s not about me. It’s about YOU. The person out there struggling with self diagnosis and all the feelings that come with it. I want you to know you’re not alone.

I want you to know that there should be acceptance for self diagnosed autistics too.

Self-diagnosed and proud for over a year

My self-diagnosis experience started at the end of 2020 when my bright haired and bubbly counsellor said ‘You do know that while you’re waiting for your assessment that you can self-diagnose?’. This caught me off guard. As someone in the mental health system for most of my adult life, I was under the impression that diagnosing is the job of someone qualified. The only thing I’m qualified in is book categorisation and being late for everything.

She continued to explain that because getting an autism diagnosis is so difficult and the criteria so flawed, many people identify as autistic so that they can make sense of who they are and understand themselves better. Whether it’s lack of money, gender, identity, race or geography, getting formally diagnosed is a privilege not afforded to many.

This made me really sad. Also confused. The rules say that you need a doctor to tell you. That’s what society says too.

Turns out, self-diagnosis is not really diagnosing. It’s a way of identifying with traits that you see in others that really hit home with you. I started looking into it. There wasn’t much online about SD but the logic behind it made sense. Especially as I was in diagnosis limbo for 12 months. I was in a bad place feeling so unsettled. So I decided to channel that into being creative. Or what you might know as a ‘special interest’. I started making little Instagram reels. They were daft and fun and kept me occupied during lockdown.

That was until one video where I stated ‘Self diagnosis is valid’ hit 10,000 views. I nearly fell off the chair. The comments were going wild and I couldn’t keep up. They were a variation of people telling me they felt seen and sharing experiences. Then there were the trolls. And the chip-on-the-shoulder folk who decided they didn’t like me.

Meh, you can’t have it all.

Doing the videos helped me to process what SD entailed and how it would help at my autism assessment in November 2021.

Being a self-diagnosed autistic, I learned A LOT

All I wanted was to be accepted. I wanted to find a space that I could learn from but also share my experiences in so that others wouldn’t feel so alone.

Here’s why acceptance is so important to those of you who are self-diagnosed:

It’s so confusing when you think you’re autistic but you can’t get any medical professionals to help you. Instead they tell you ‘it’s just anxiety’ or ‘having a mental breakdown is fine. Take these tablets.’ So you start to doubt yourself. Then you see an autistic content creator sharing their experience of meltdowns and shutdowns and suddenly realise, ‘I do that too!’. You go back and forth between ‘yes I am’ and ‘nope, they said I can’t be’ which leaves you really confused. Knowing that diagnosed autistic people are open to sharing their space with you makes the confusion that bit less.

It can be lonely when you’re a self-diagnosed autistic. No one really understands. It’s because society says unless a doctor diagnoses and tells you with 100% certainty that you’re autistic, it doesn’t count. Trying to explain to people that I suspected I was autistic and what self-diagnosis was, people looked at me like I’d lost my marbles under the sofa. That was until I found other people like me and we could share our experiences. Acceptance helps with not feeling like you’re all alone.

If more autistic communities were open to those who are self-diagnosed, it would be an even better world to live in. SD people day in day out have to deal with people saying ‘You can’t diagnose yourself’ and ‘You’re just pretending for attention’ and all the other crap that falls out of people’s faces before they’ve thought about it. Having an autistic person/community say ‘You are valid’ and ‘Your experiences do matter’ is huge.

That was a big thing for me. Feeling like I actually belonged somewhere with like-minded, intelligent people who were also trying to work out what frequency the rest of the world was on. Being told by another SD person ‘I totally understand! I feel that too’ really does help to reinforce that sense of belonging.

Self-diagnosis is as much about learning as it is about reassurance. Learning more about yourself so you can make the accommodations needed to survive in this world and then feeling reassured that you’re not going mad or are failing at life. That was huge for me. It made me feel like less of a failure and more of a work-in-progress.

This was a very long-winded way of saying that to me and many other autistic people, SELF DIAGNOSIS IS VALID. Having been through it, experiencing it and living it myself, I totally understand. Which is why I wanted to write this post.

I want to leave you with this thought…

Acceptance applies to self-diagnosed autistics too this Autism Acceptance Month.