You might think ‘what on Earth?’ but I promise it’s going somewhere. 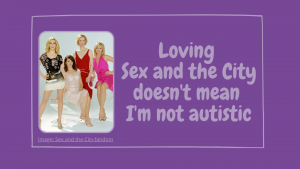 When I went for a private autism assessment in 2017, I was told told that my interests weren’t unusual enough and didn’t fit the criteria.

I can’t help but wonder how someone can tell you that your interests aren’t odd enough to warrant talking about. Everyone has their quirks and things they do that sometimes they’re embarrassed about or that they’re really interested in. I felt, in that moment, that the psychologist was dismissing me because I was female. If I’d told her I liked trains, numbers and dinosaurs, would that have made a difference?

I think that just because I’m loving Sex and the City, doesn’t mean I’m not autistic.

This is what my blog post is about. I’ll tell you a little bit about what intense interests are and how mine have affected me. If you’re going through the diagnostic process right now, I hope this helps!

What is an intense interest?

According to the National Autistic Society: “Many autistic people have intense and highly-focused interests, often from a fairly young age. These can change over time or be lifelong. It can be art, music, gardening, animals, postcodes or numbers.” (Source)

To explain this a bit more, when the diagnostic criteria was first created, it was aimed predominantly at males because they showed more obvious signs and difficulties. Females on the otherhand, have learned to adapt and ‘mask’ any obvious symptoms so they fit into society. They seem to ‘fit in’ because of learned behaviour.

Intense interests are super important because:

Throughout my life, I’ve had really strong obsessions/interests. However, none of these ‘fit’ with ‘traditional’ autistic interests like trains, patterns in numbers or dinosaurs.

Some of my more female interests have been:

Some of these were more apparent when I was younger (I did love a pop band!) but some have continued through to me being an adult. For example, reading/collecting books, dogs and music.

But when I went to have a private assessment for autism four years ago, these weren’t taken into account. I told the psychologist about how I obsessively collected books when I was younger and would get quite distressed if I didn’t have the full set (I used to collect the Goosebumps, Babysitter’s Club, Animal Farm, Roald Dahl and Enid Blyton collections). They would all be lined up in number order on different shelves in my bookcase.

I was also absolutely obsessed with certain pop bands; the Spice Girls, Boyzone and Let Loose (you might not have heard of them – they were super crap but I was IN LOVE with the lead singer). I had all of the merchandise you could possibly get for the Spice Girls – t-shirts, a baseball cap, a full photo album of collectible photos, cassette tapes, video recordings of Live and Kicking (a Saturday morning TV show) and stickers that came with bubble gum. At school, I also made my friends pick a favourite Spice Girl and ‘perform’ in the playground. I always wanted to be Sporty Spice (Mel C) but because I had really long blonde hair, they made me be Baby Spice (Emma Bunton). This is probably why I struggled to have friends. I feel like I’m properly showing my age!

Sex and the City and me

As a grown-up, many of the interests above are still very much a thing today. The one that has really taken over was an intense interest/obsession with the American TV programme, Sex and the City. If you haven’t heard of it before, Sex and the City came out in 1998 and was based on four glamorous friends who live in New York and their relationships with men. I remember back in 2004, when I was 15, my sisters and I sat down to watch the final ever episode. I hadn’t seen any of the previous episodes but this one was just magical. Set in Paris, it was so romantic and was like a fairytale. I loved it. It was what I aspired to when I grew up.

When I went to Uni, the obsession really took off. My female housemates and I would pile into one of our rooms armed with drinks and snacks to watch this series. We loved it. We were in our 20s like the women in the programme and aspired to be like them.

During my time at Uni, I re-watched the series several times, saw the film, bought all the books and even did my dissertation thesis on whether Sex and the City was a feminist text. As you can imagine, my male tutor was delighted that he has to sit and watch the entire series so he knew what I was banging on about. His wife, however, was well chuffed!

Ultimately, I wanted to grow up and be like Carrie, Charlotte, Miranda and Samantha. I even went into public relations (PR) because I thought I could be like Samantha. Turns out, I’m definitely more of a Charlotte.

This counts, according to my counsellor, as an intense and all consuming interest.

I explained all this to the psychologist and she kept asking me if I could remember number plates. phone numbers or loved trains. I did used to have an amazing memory. If my Mum had let me, I would’ve had a chance at being a UK champion at a Guiding memory game contest. Sadly, she couldn’t be convinced. A bit like the violin. She hid it under the stairs so I couldn’t play it – I was pretty God-awful at it as it happens. The case never had a handle so I had to carry the bloody thing under my arm like a gun! Not a good look, I assure you.

When I told the psychologist all about the above, she said ‘so nothing really unusual or out of the ordinary then?’ And this is the problem for so many females. Because our interests don’t match with that of stereotypical males, we get overlooked. Because we’ve learned to hide or mask our funny behaviours, we get overlooked.

If you’re female and going for assessment here are some tips:

In the future, I hope the criteria is looked at and updated to help identify undiagnosed autistic women so they can access the support that should be available to them. Our interests might not be stereotypical but they can be all consuming. They bring comfort and allow us to escape to a world where inequalities aren’t an issue and our square peg-ness isn’t a second thought.

Please note: I’m not a medical professional. These are just a few things I’ve learned along the way that I wanted to share with you.