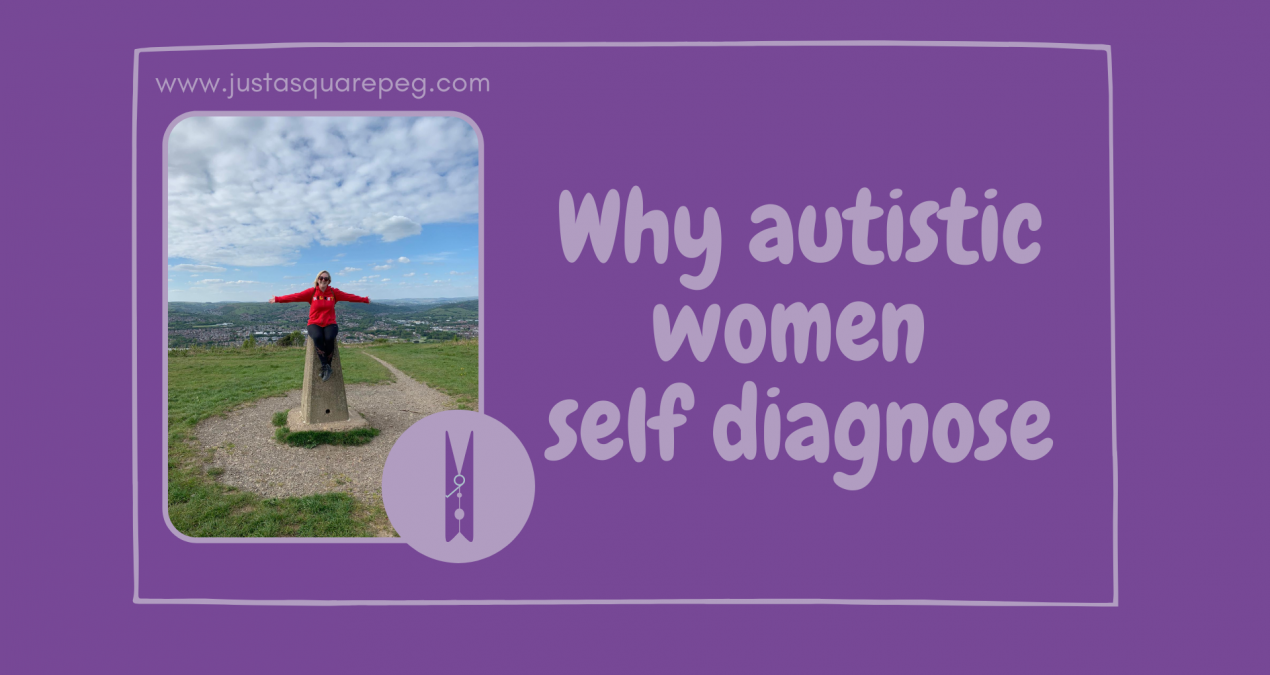 Why many autistic women self diagnose

by Square Peg
No Comments

I’ve been doing a bit of research recently about why many autistic women self diagnose.

Now, you might be wondering HOW someone can reliably diagnose themselves with a condition. I thought the exact same when I was told this by my counsellor. But, having spoken to doctors, the local autism service and many autistic advocates, self diagnosis is in fact valid and isn’t something that’s done lightly or without thought.

In this blog post, I’m going to explain more about why many autistic women self diagnose including:

Please note: I’m not a medical professional. All information in this post has been researched or is my own experience.

What is self diagnosis?

It might be obvious but self diagnosis in relation to autism is when someone who isn’t formally diagnosed feels a connection or affinity to the autistic community. They identify with information in the diagnostic criteria and may be currently waiting on a waiting list for assessment. Many women go through a great deal in order to be accepted onto a waiting list for assessment but some never make it. This could be for many reasons but by the time they decide to self diagnose, they’re exhausted mentally from trying to find answers about who they are and why they don’t quite seem to fit into the world.

At the minute, I’m on an NHS waiting list for an autism assessment. Having been diagnosed with BPD, anxiety and depression in the past, I felt really weird about diagnosing myself as autistic. I felt like a proper imposter and that I didn’t have the right to tell people I was autistic. After being supported by my counsellor through this process, she explained the idea of self diagnosis and that I should look into it. She is autistic herself and has received a formal diagnosis. I then had a video call with the local autism service who are just the nicest people. I was explaining some issues I was having with organising myself, being super fixated on certain things and being really forgetful with my medication. They said “We totally know how you feel and it’s ok, we’re here to help you.”

I talked to them about self diagnosis and they said “You need to tell people that you are because we believe you are.” I nearly cried. Having that validation from an official source made me feel less bleurgh. That’s when I started to look into why many autistic women self diagnose.

Why many autistic women self diagnose

Autism self diagnosis in women happens because there are barriers to getting a formal diagnosis. The National Autistic Society says that “Various studies suggest that the ratio of autistic males to females ranges from 2:1 to 16:1. The most-up-to-date estimate is 3:1.”.

So for every three males diagnosed, ONE female is diagnosed.

It is said that when psychiatrist, Leo Kanner, did a study in 1943 of a small group of autistic children, there were four times as many boys as girls (Source). Ultimately, the criteria is weighted more towards males than females. Which is why, when girls and women go for an assessment they don’t ‘fit’ this criteria. This is so frustrating. You go to the appointment armed with all of the information, examples of how you’re struggling and how you fit the criteria, only to be told that because you’re not intensely interested in dinosaurs, because you’re pretty intelligent and you can make eye contact that there’s no way you could be autistic. You leave the appointment feeling deflated, upset and frustrated and decide that you don’t want to have to go through that again and that you inner imposter was right. When in actual fact, your inner imposter needs to pipe the f**k down.

The following are a few other reasons why many autistic women self diagnose:

Not being listened to by professionals

In a study carried out by Laura Foran Lewis in 2017, she found that “Fear of not being believed by professionals was identified as the most frequently occurring and most severe barrier.”

When I was diagnosed with borderline personality disorder in 2017, the psychiatrist asked me if I thought it was the right diagnosis. “What do I know?” I thought to myself. I was so pleased to hear that what was happening in my head had a name that I just went with it. But then I started Googling (oh yeah) and found that actually, that didn’t sound like me at all. I was too afraid to question it at first.

However, my counsellor kept saying, “I’m so sure you’re autistic. You need to question the BPD diagnosis.” So I did. I rang the local CMHT, I spoke with my GP, I tried for a year to get an appointment with a psychiatrist. I was in crisis (like so many people) at the start of the pandemic in March and didn’t get to speak to a psychiatrist until November 2020. At which point she told me my BPD diagnosis was a mistake and that I was autistic, but couldn’t diagnose it. She was so nice and I really appreciated that appointment and thanked her for finally listening to me. She said “You’re doing the right thing. Keep pursuing it and you’ll get there. I’m so sorry this happened.” Not being listened to seems to be a definite barrier and a worry to so many women who are seeking diagnosis later in life.

In many places across the globe, people have to pay an extortionate amount of money to get an assessment and formal diagnosis. Here in the UK, we have the NHS which means our healthcare is covered by tax and national insurance so is of no cost to us. Although this is amazing, it does mean that waiting lists for things such as autism assessments are very long and can take years. There is the option to pay but assessments cost between £1000 and £4000 – so are not accessible to all. Those with lower paying jobs or those on benefits who might not be working because of their suspected autism have no real chance of getting assessed.

The original diagnostic criteria focuses more on young males than females. This means that many of the traits seen in males aren’t always seen in females, hence misdiagnosis or diagnosis later in life. Women tend to mask/camouflage their traits better than males so learn behaviours from people surrounding them. For example, forcing themselves to make eye contact, finding a hobby that’s much more ‘acceptable’ to have an interest in, appear to be very socialised and ‘fully functioning’.

When I had a private assessment in 2017, the psychologist said that because I ‘didn’t struggle as a child’ and that my ‘mum said you developed fine when you were younger’, I wasn’t counted as autistic. A lot of the struggles I went through when I was younger, I never ever told my parents. In fact, I never told anyone. Because I was embarrassed. And ashamed. And couldn’t understand why no one wanted to be my friend or why I had a meltdown every time I was in academic subjects like maths and science that never made sense. My poor stepdad was privy to my horrific maths related meltdowns. He was so patient bless him!

My parents started to notice more when I was getting jobs, failing at them, having meltdowns and leaving. They couldn’t understand why this was happening and I think, like me, felt quite frustrated. I told the psychologist that this was having a MASSIVE impact on me as an adult. But she ignored it. And all the notes I took with me. I didn’t fit the criteria and that was that.

Why self diagnosis is widely accepted

Since looking into being autistic and what it means, I’ve been met with so many amazing people in such an accepting community. A community where difference is celebrated and appreciated. A community which, when sharing experiences, are met with ‘OMG, me too!’ and ‘Oh thank goodness, it’s not just me’. You can almost hear the sighs of relief from a group of women who have been called lazy, drama queens, weird and rude for most of their lives. It’s VALIDATING to read other people’s experiences and RELATE to them.

Why it can be controversial

As with anything, there are those who believe self diagnosis is a load of bollocks. And that’s fine because that’s their own opinion. To be fair, I didn’t know it was a thing up until recently.

It’s seen to be controversial because:

I’ve had several DMs on Instagram telling me to ‘Shut the f**k up’ and ‘You’re an idiot and you don’t know what you’re talking about’.

These messages were from MEN who had been FORMALLY DIAGNOSED AS CHILDREN and are therefore pretty privileged to have spent their lives knowing why they think differently to everyone else. On a plus, for every shit comment, I had 10 lovely ones from women in the same position who were too afraid to speak up. You are the ones I’m doing this for. Because you matter too. Sod the haters.

However you feel about self diagnosis, I hope that I have explained it well enough above! As I mentioned, I’m just learning all this info and taking you along for the ride. Until I am lucky enough to be given an assessment date, I’ll continue to be self diagnosed and hope that, in the years to come, more women will be formally diagnosed so they don’t have to diagnose themselves and yet again, be turfed out of another community.

What is autism self diagnosis?